Despite the fact, that every developer takes care about perfect functioning of the application, sometimes shit happens. Reasons can vary, depending on the human factor, unreal deadlines, obscure technical specification, last minutes improvements, poor testing and so on. All these factors can create significant losses, world fame and comic situations simultaneously.

1) Maybe, there are no persons, who do not know huge retailer, like Amazon. At the beginning of Amazon era, a consumer could order the negative quantity of books, and total orders price was enrolled on buyer’s credit card. It was the favourite bug of founder Jeff Bezos: "We sent the price of books to customers, and obviously we waited until received them".

2) In Microsoft Bob software (operating system for beginners), after the third time entering the wrong password, the user was asked if he did not forget own login information. If the answer was yes. Bob member was simply offered to come up with a new one that would replace the previous. This means that any user could change the password to another - and gained access to the account.

3) Another interesting situation happened once upon a time, in 1996 with ordinary citizens of Chicago, they suddenly got $ 900 million on their card, due to expensive bank system bug. Nobody didn’t make plastic surgery and escaped with such money abroad because the total sum significantly exceeded bank assets.

4) Moving further, we should talk about famous Apple devices. In 2012, Siri demonstrated a bug, like in fairy tale “Snow White”. To the question "What is the best phone in the world?" It answered  “Nokia Lumia 900 4G". The reason for this strange behavior was the fact that request was transmitted to Wolfram Alpha system, maintained by other company. The system issued a response, based on statistical data and users feedback.

5) Iphone’s competitor, Windows Phone had more interesting issue. Everything worked well, until user updated software. During this process, he received the message to put installation disk Windows and reload PC. The problem occurred due to OS Windows core was based on Windows NT 1993. That is why mobile phone considered itself as computer. 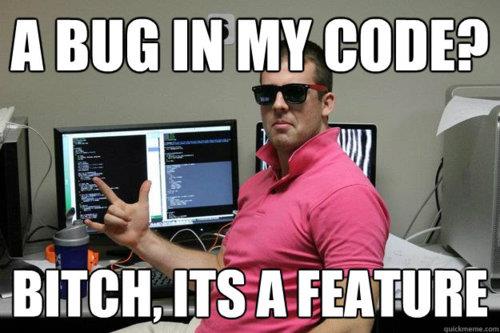 6) Because of Xbox One availability to create multiple accounts for different users, 5 years user Christopher Wilhelm von Hasse tried to log in father’s account,  entered few gaps, after the first unsuccessful attempt to type the password. It allowed him to access all of his father's games. His father worked in the sphere of information security and reported to Microsoft about the issue. And the boy's name was posted on the Microsoft website, in section "security researchers in March 2014". So, Christopher became the youngest hacker in the world.

To sum up, if you would like to get a clear application, you should describe the objectives in more details, set real-time frames, maintain communication with developers, and pay attention to careful testing of different modules and security as well.